On the Ground in Indianapolis! Stop Red Flags!

On the Ground in Indianapolis! Stop Red Flags!

Gun owners across the country were frustrated when not a single consequential pro-gun bill passed through Congress during two years of Republican control after President Trump’s inauguration.

They grew irate when the NRA-backed Senator Dianne Feinstein’s FIX-NICS legislation, a dreadful bill that is disarming gun owners who haven’t been convicted of a crime.

When the NRA came out in favor of banning bump-stocks, which just set us up for losing more accessories down the road, gun owners simply couldn’t believe it!

But it was the NRA’s open and public support for ‘Red Flag Gun Seizure’ legislation — something the liberal media outlets nationwide praised them for — that sent gun owners over the edge.

That’s because ‘Red Flag Gun Seizure’ legislation would disarm gun owners across America who have never been arrested, charged, or convicted of anything at all!

And that’s why the American Firearms Association is on the ground this week in Indianapolis, doing everything we can to expose the NRA’s support for ‘Red Flags!’ 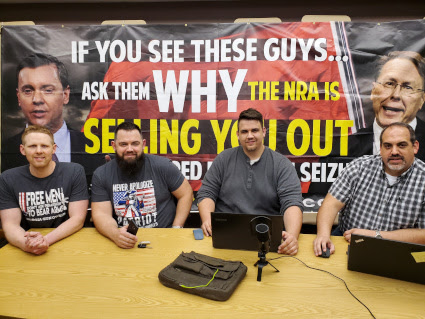 Let me tell you, we’re going all in as we work to educate as many gun owners as possible as to what is going on.

We’re passing out flyers to tens of thousands of gun owners here on the ground, informing hundreds of thousands more through our non-stop Facebook live video updates, and granting as many media interviews as we can.

In addition, the banner you see above is driving around the Convention Center here in Indianapolis 12 hours a day — ensuring that Wayne Lapierre and Chris Cox understand that we are sick and tired of their repeated betrayal!

Can you help us expose the NRA’s support for this gun-control bill?

If the NRA continues to call on Congress to advance this bill, it is almost guaranteed to pass into law.

But if the NRA realizes that grassroots gun owners from Portland, OR to Jacksonville, FL are abandoning them for supporting this bill, we may turn the tide.

This is our best chance of doing that.  Right here, right now, in the midst of the NRA’s annual convention.

Please donate as much as you can to help us expose the NRA and battle ‘Red Flag Gun Seizures’ at the same time!

Meanwhile, stay tuned to your email inbox and our Facebook page for ongoing updates here in Indianapolis, and a massive announcement that we will be making tomorrow!

P.S. The NRA has turned their back on rank and file gun owners and are now supporting ‘Red Flag Gun Seizure’ legislation, as you can see from Chris Cox’s video!

That’s why the American Firearms Association is here in Indianapolis right now, in the middle of the NRA convention, to educate as many gun owners as possible.

But we need your help.