Plane in the Sky — President Trump Can’t Miss It!

Plane in the Sky — President Trump Can’t Miss It!

Indianapolis, Indiana — In case you missed our email from earlier today, you might not know that the American Firearms Association is hammering away at NRA top brass right now in Indianapolis.

We’re sick of the NRA’s support of FIX-NICS.

We’re sick of the NRA’s support for banning bump stocks.

And we’re sick of the NRA misleading President Trump, telling him that supporting gun control bills like this won’t affect him next Fall!

And that’s why the AFC has a plane in the sky right now, 1000 feet over Indianapolis, circling the NRA’s convention with a special message for President Trump! 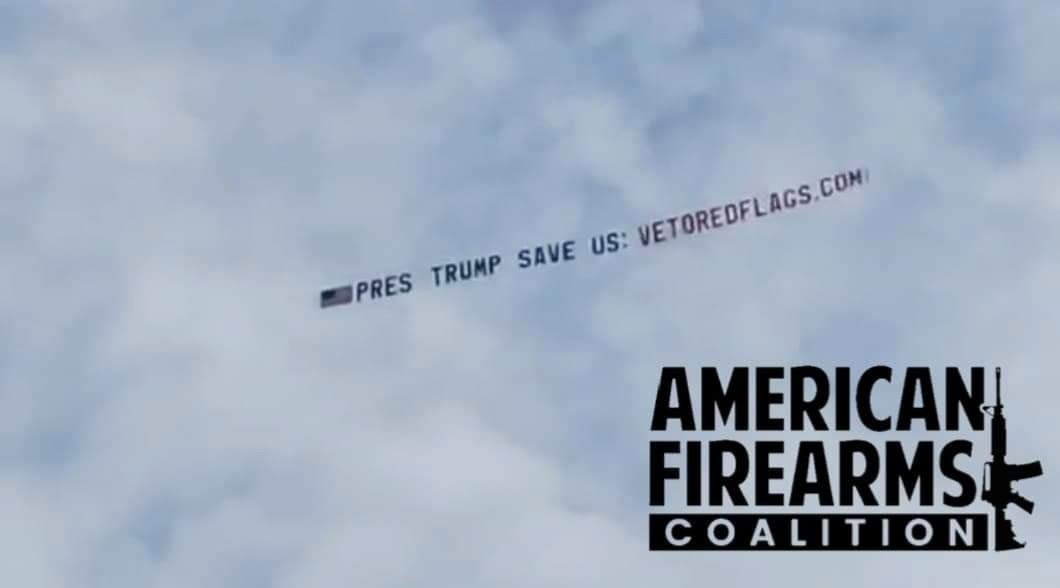 This banner has already been seen by almost 30,000 gun owners here in Indianapolis, while hundreds of thousands more from across the country will see it in the coming days.

And thanks to the help of some wonderful AFC supporters, we were able to get some massive mobile banners mounted on trucks that are blanketing the entire area around the NRA site!

But what’s really cool is that our pilot has informed us that he has cleared his schedule and is able to fly tomorrow, too, if we can afford to keep him up there!

That’s why we are writing you right now — launching this email from a parking garage near the Lucas Oil Stadium –- to ask you for your help!

$500 will allow us to buy another full hour of airtime!

$250 will get us another 30 minutes, $125 buys 15 minutes, and any amount under that can be combined with other supporters to lock in as much air time as possible.

I know it’s expensive — but think of what your money is going to be used for!

This isn’t a 30 second radio spot on a cheap FM station outside of Fayette, Alabama.

This is a massive banner . . . being pulled by an airplane over downtown Indianapolis . . . with a special message for the President of the United States . . . who will be on site later today!

Please help us in any way you can — right away!

In case you missed our email yesterday, you might not know that volunteers with the American Firearms Association are on the ground in Indianapolis right now, at the NRA’s annual convention!

And with the NRA being completely tone-deaf and unwilling to listen to grassroots gun owners — and with President Trump due to arrive later today — we are doing everything we can to urge him to veto this bill if necessary!

In fact, moments ago, our chartered airplane took to the skies and is currently flying at 1,000’ over downtown Indianapolis with one simple message for President Trump.

As you can see, our message is simple.  We are urging President Trump to tell the world that he will veto ‘Red Flag Gun Seizure’ legislation, should it reach his desk.

This may well be our best chance of stopping this legislation and exposing the NRA’s support of this bill at the same time!

But we need your help.

American Firearms Association supporters and members of the board have personally funded our ‘Freedom Flight’ for most of the day today.

But at the cost of over $500 per hour, we need your help to keep this plane in the air through tomorrow!

This is your chance to help us speak directly to the President in a way that he is all but guaranteed to notice!

You see, not only is the NRA betraying grassroots gun owners nationwide, they are also giving horrible policy and political advice to President Trump.

But if he finds out that there is a revolt underway at the grassroots level over the NRA’s support of ‘Red Flags’ — President Trump may realize that not only is it bad policy for America, it’s bad politics for him, as well.

This may well be our last chance to stop this legislation dead in its tracks.

But while we’ve secured the funds for the first day of flight time, we need your help to keep this plane flying tomorrow! At $500 per hour, some AFC supporters have funded an entire hour, something that we are very grateful for.

Others are funding 15 minutes of flight time at $125 per segment, and we can’t thank those individuals enough!

So whether you can fund an hour, 15 minutes, or just 1 minute of flight time, please do what you can immediately, as we need to let the flight company know if we are booking them for Saturday as soon as possible.

The fight is on here in Indianapolis, stand with us!

That’s why we’re here in Indianapolis doing all we can to expose the NRA, and to try to communicate with President Trump, urging him to kill this legislation!